In Malaysia, Section 376 of the Penal Code states that whoever commits rape shall be punished with imprisonment for a term which may extend to twenty years, and shall be liable to whipping. 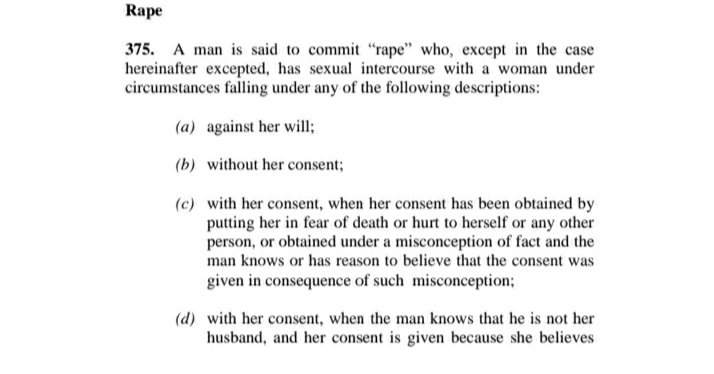 Marital Rape is not legally recognized but under the new section, Husband causing hurt in order to have sexual intercourse in Section 375A states that any husband causing fear of death or hurt to his wife in order to have sex shall be punished for a term which may extend to five years. Sadly, even if there was severe injury inflicted on the survivor when she was raped, it is still not considered rape in legal terms because the survivor and the perpetrator are a married couple. This means that the usual penalty of up to 20 years for rape is not applicable here, and the perpetrator can get away with lesser jail time.

In terms of gang rape, where a woman is raped by one or more in a group of persons, each perpetrator involved shall be deemed to have committed gang rape.

If rape/sexual intercourse occurs between two people where their relationship is such that they are not allowed, under the law/religion to marry each other, the perpetrator is said to have committed incest and will be punished under this law.

This offense is contained in the Penal Code (Kanun Keseksaan) under Incest in Section 376A.

Sexual assault (eg. molestation, penetration of the anus or vagina with an object without the person’s consent) is any type of unwanted or inappropriate conduct of a sexual nature that happens through force, the threat of force or creates an atmosphere of hostility and/or intimidation.

This offense is contained in the Penal Code (Kanun Keseksaan) under Assault or use of criminal force to a person with intent to outrage modesty in Section 354.

Sexual Harassment in the Workplace

Section 2 of the Employment Act, states that sexual harassment means any unwanted conduct of a sexual nature, whether verbal, non-verbal, visual, gestural or physical, directed at a person which is offensive or humiliating or is a threat to his well-being, arising out of and in the course of his employment“.

Employers have a duty to investigate a sexual harassment complaint under Section 81B (1) unless an investigation into the complaint had been made before which yielded no findings, or that the employer believes that the complainant has made a vexatious complaint (the exceptions are listed under Section 81B (3). NOTE: If you need help with this, please call our Telenita helpline – 016 237 4221 so that we can give you the information that is most relevant to your circumstances.

As we can see below, under Section 81C and 81F, the employer must conduct an inquiry, and upon receiving the results of the inquiry, take adequate disciplinary action as listed under Section 81F. 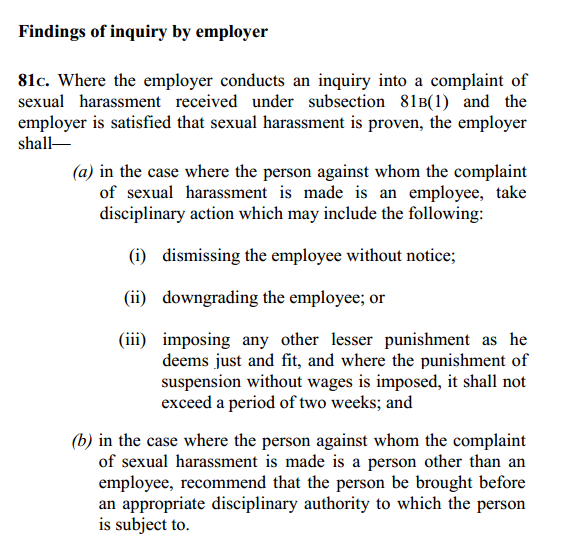 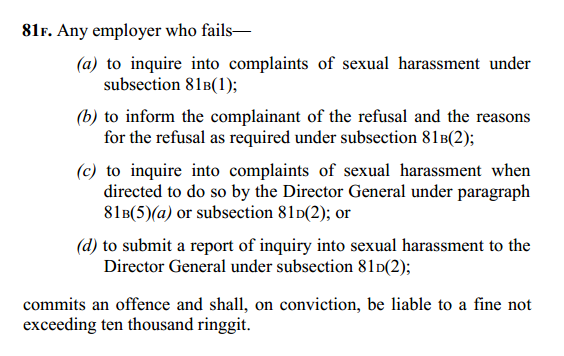 However, if the survivor is unsatisfied with the refusal of the employer to inquire into their sexual harassment case, the survivor can refer the case to the Director General of the Ministry of Human Resources under the Department of Labour Peninsular Malaysia.

In the Penal Code, Word or gesture intended to insult the modesty of a person in Section 509 mainly covers sexual harassment in the form of visual, verbal and gestural (non-verbal). There is no proper law for psychological sexual harassment (persistent invitation for dates) to protect the general public yet.

A few minor forms of sexual harassment (in public spaces) can also be found in the Penal Code (Kanun Keseksaan) under Sale,etc. of obscene objects to young person in Section 293 and under Obscene songs in Section 294. This means that it is a CRIME and you can lodge a report with the police.