What is Sexual Harassment?

Sexual harassment refers to an unwanted or unwelcome conduct that is sexual in nature, and may be committed physically, verbally, non-verbally, psychologically and/or visually, which may cause the person being harassed to feel humiliated, offended or threatened.

Sexual harassment can be perceived as a spectrum.

On the lower end of the spectrum would be conduct that is generally considered benign such as catcalling whereas on the other end, you will find severe acts of aggression and harassment such as aggravated stalking.

Does sexual harassment only affect women?

Where Can Sexual Harassment Happen?

Sexual harassment can happen anywhere and to anyone 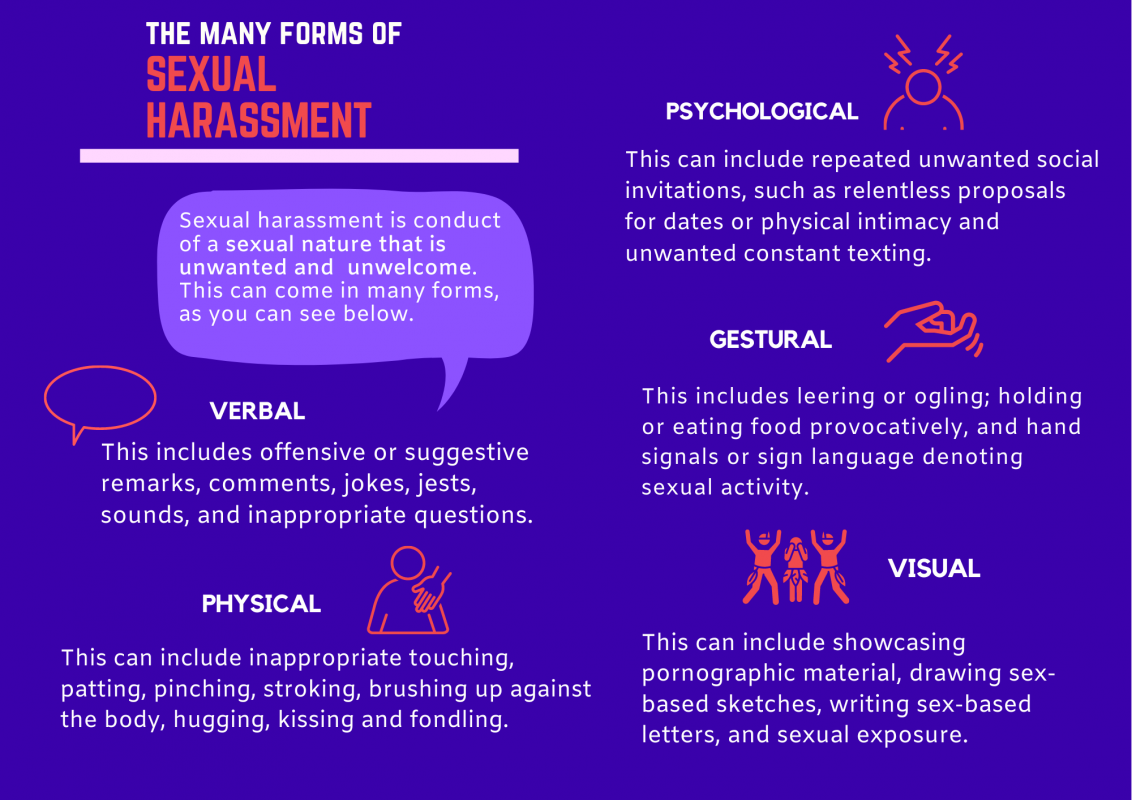 It usually targets a specific person either through direct contact or by the threat of disseminating personal information or materials that causes distress, fear, and/or anger.

Cyberstalking involves the use of electronic means to monitor or stalk a person unlawfully, threateningly or maliciously.

Sexual Harassment at the Workplace

Forms of Sexual Harassment in the Workplace

It refers to any unwanted conduct of a sexual nature which occurs when one is pressured, tricked, threatened or forced into receiving said conduct. What must be distinguished here is that the person being sexually harassed is being coerced in a non-physical way into receiving the harassment. In some countries, this is also known as Quid Pro Quo.

A tertiary student was being compelled by a lecturer to ‘go out with him‘ in exchange for financial assistance from the university. The lecturer in question was in charge of endorsing or recommending student beneficiaries.

In this instance, it is clear that the sexual harasser’s (the lecturer) method of securing the survivor’s (the student) agreement – not consent, as consent cannot be given under duress – was not physical in nature but the act he was proposing (‘go out with him’) could lead to an act of a sexual nature.

An example of this would where a security guard asks a person out everyday despite repetitive rejections. The security guard then goes on to create situations where they are constantly dodging the person’s footsteps – and even goes so far as to leave love letters on the person’s windscreen. The situation makes the person feel very alarmed and is worried for her safety. The situation compels her to come to office later than usual or leave office early to avoid running into the security guard. It has affected her work performance and satisfaction. This person is now thinking of leaving her job in order to escape said security guard.

Here, it is clear that the person receiving the security guard’s attentions find it disturbing, alarming and that creates a hostile environment where the person feels unsafe. This has resulted in the person making dramatic changes to her life in order to avoid or end the unwanted conduct of the security guard.

It refers to any type of unwanted or inappropriate conduct of a sexual nature that happens through force, threat of force or creates an atmosphere of hostility and/or intimidation. Sexual assault describes various types of criminal acts that are sexual in nature, as opposed to the specific act of rape.

Sexual assault ranges from unwanted touching and kissing, groping, folding, forcing the victim to touch the perpetrator in sexual ways and/or to perform sexual acts, and attempted rape.

This is an instance of sexual assault, because the employer has touched her employees inappropriately and has attempted to force herself sexually on them.

It is against our very constitution to discriminate a person on the basis of sex. Article 8(2) of the Federal Constitution protects the Right to Equality. This article states that except as expressly authorised by the Constitution, there shall be no discrimination against citizens on the ground only of religion, race, descent, place of birth or gender in any law or in the appointment to any office or employment under a public authority.

Noorfadilla had accepted an offer to be a temporary teacher at a government school. Nevertheless, when her employer found out that she was pregnant, the employer voided the offer. Noorfadilla appealed to the court for interests, damages and costs. The sued parties included the officer, Federal Government, Education Minister and Education Director General. According to Malaysia’s obligation under the Convention of the Elimination of all forms of Discrimination against Women (CEDAW), this case comprises of direct sex discrimination which uses pregnancy as a reason to prevent women from working, and indirect sex discrimination whereby men and women are not treated equally at a job.

It is important to note that discrimination in the workplace on the basis of gender can be rationalized by the employer on technical grounds. It is worthwhile to explore the Industrial Relations Act 1967 to see whether your unique circumstance is protected under this act.

What Can I Do If I’m Sexually Harassed? 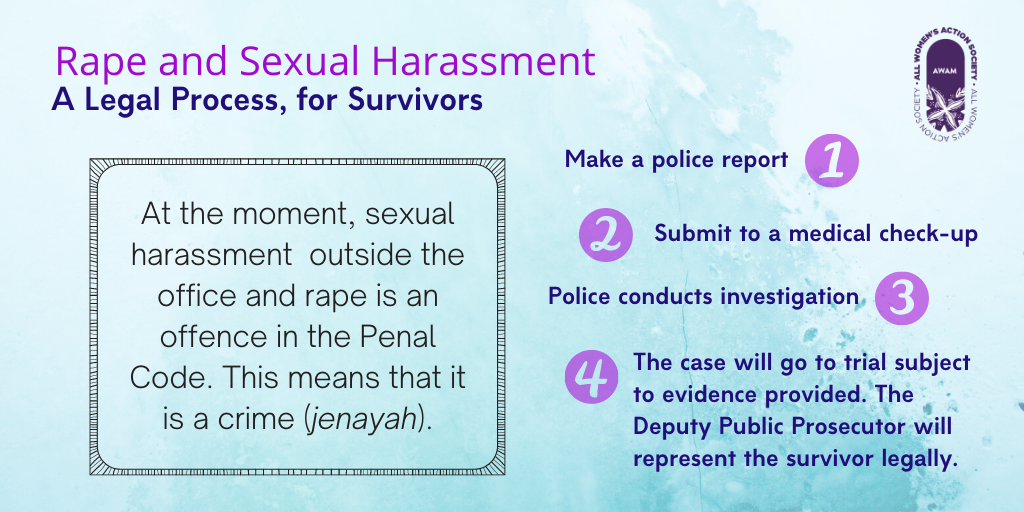 Is Sexual Harassment Punishable By Law?

Section 2 of the Employment Act, states that “―sexual harassment means any unwanted conduct of a sexual nature, whether verbal, non-verbal, visual, gestural or physical, directed at a person which is offensive or humiliating or is a threat to his well-being, arising out of and in the course of his employment”.

Under Section 81B (1), employers have a duty to investigate a sexual harassment complaint, unless an investigation into the complaint had been made before which yielded no findings, or that the employer believes that the complainant has made a vexatious complaint (the exceptions are listed under S81B (3).

Based on Section 81C and 81F, the employer must conduct an inquiry, and upon receiving the results of the inquiry, take disciplinary action as listed under Section 81F.

In addition, several forms of Sexual Harassment (including Sexual Assault) is criminalized under the Penal Code.